On Tuesday the Warwick 2 XV faced a massive Rotorua 2 XV in an extremely tight and hard fought match. Unfortunately, Rotorua had too much power and scored straight off the start but this didn’t put the Warwick boys down, with them putting in a huge effort for the whole match right till the final whistle.

The match finished 40-0 but there were many positives to take from the match. The boys showed grit and determination for the full game (the Rotorua pack being much larger with an average weight of 100kg a forward) with the Warwick forwards managing to keep up with them at scrums and across the pitch.

The man of match for the first half in my opinion was Oli Sengupta as he had a top class work rate and made a range of amazing cover tackles. The boys had 23 positive attacking rucks during the game which was higher than aimed for considering Warwick had more ball in the second half. Also, the boys made 28 positive tackles which was a very good number considering the raw size of the opposition.

The second half man of match in my opinion was Giles King as he never stopped or backed away, no matter what was in front of him. The boys also had a few good kick chases as a team which was one of the main work ons for the game.

Overall, the boys put in a full hearted performance and there were many more positives than negatives to take from the game.

On a scale of one to big how big were the Rotorua players?
Were massive.

Opinions of the teams attacking play during the match.
Quick but not enough firepower to gain substantial ground.

Opinions of the teams defensive organisation during the match.
Organisation could have been better however was consistent throughout game.

How did the conditions affect the teams strategy?
Wet conditions favoured Rotorua players as had bigger players and we use our hands mainly.

Anything that you thought the team did particularly well that perhaps we don’t normally do as much?
Were consistant and had good attitude even when game was against them.

Would you class the game as fully mad?
Yes was a madness.

Where do you think the team can improve?
Working on body position in attack.

Highlight of the match as a whole.
Giles getting bosched. 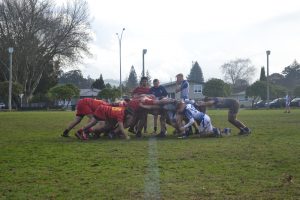 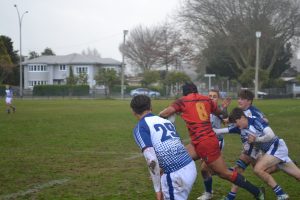